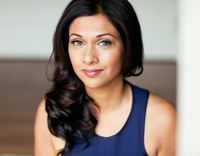 Interning was short lived for Karen and she was quickly hired at CFMT Television as a general assignment reporter covering everything from hard news to entertainment.  Karen soon began substituting as a host. In 2001, Karen took the helm of Bollywood Blvd, an entertainment show covering the Indian film industry where she had the opportunity to interview prominent celebrities and directors.

The road to Bollywood eventually veered off into an interesting direction when Karen was asked to host a half hour cooking show called The Veggie Table for CFMT. Never being much of a cook, she took this opportunity as a chance learn something new, a skill her family benefits from today. She’s now a self-proclaimed cooking expert, sharing her culinary expertise on a spinoff of her original cooking show, The South Asian Tasting Table.

Karen took her hosting and reporting skills to the freelance world as well, landing coveted jobs covering the Toronto International Film Festival (TIFF) and reporting live from the red carpet at the 2000 Grammy Awards in Los Angeles. Global TV sent Karen to New York in May of 2000 where she covered the Daytime Emmy Awards, a career highlight for her.

A news reporter never truly earns their stripes without a stint in Canada’s prairie provinces and Karen did just that in 2001. She moved her life to Edmonton Alberta to work as a news writer and weather anchor for A-Channel but her desire to return to her hometown was never far away. She returned to Toronto in 2002 to take on the role of morning news anchor for The Weather Network where she stayed for ten years, becoming a trusted face in which Canadians relied on for the weather report.

In November of 2012, Karen landed her biggest role yet as a weather anchor and fill in host for CTV’S Canada AM. Audiences can catch Karen giving viewers the good, the bad and the ugly in Canadian weather and the occasional Leafs score.

In 2014, Karen took time off to raise her two boys. Motherhood didn’t slow this ambitious lady down.  Between hockey rinks and soccer fields she managed to keep her on air profile current via social media by blogging about fashion, events, luxury items and motherhood.

In 2017, Karen made her way back to television.  She is a weather specialist/reporter with CBC Toronto 6pm & 11pm and CBC Windsor 6pm.  You can also hear Karen sharing her weather expertise on CBC Radio’s afternoon drive show Here and Now.

Always looking for new opportunities Karen joined 105.9FM THE REGION , in 2020 as the Morning News Anchor

2011 ~ 2012  THE WEATHER NETWORK, National Evening Anchor for The Weather Network