Her last name may sound very familiar to you…. as it should!

She is HOLLYWOOD ROYALTY at its finest. The Granddaughter of Lou Costello (of famous comedy duo Abbot and Costello, daughter of a Beach Boys record producer, step granddaughter of Dean Martin and goddaughter of musician Terry Melcher.

Marki Costello  was born and raised in HOLLYWOOD and she has made a name for herself , she is a Talent Manager and Celebrity Coach.   Her mother tried to steer her away from the Entertainment Industry and stressed education was the tool for success.   Shortly after the sudden death of her mother,  Marki dropped out of school. After a brief stint of finding herself she got a job with Chuck Barris.  For those of you who are old enough to remember CHUCK BARRIS was the host of  the popular TV show “THE GONG SHOW”.  Marki has said in many interviews that Barris gave her some sound advice.

“I remember him saying, ‘Look kid, you can sit back and you can watch the wheel go round and round and round and say, Hmmm, should I get on? Is it going too fast? It looks slippery. It looks scary…Or, you just hop on the f–king wheel,'” Marki reminisced. “Literally, that saying, that moment, that statement from Chuck Barris made me go, ‘I want to jump on the wheel. I want to jump on this opportunity in life.'” (clip from ENews)

From there ,Marki took a job with Barris’s  company and  learned everything about the industry from production to casting shows. The hard work paid off as she  opened up her own company, Casting Entertainment Group.

Marki Costello has cast shows like the original “The Bachelor” and “Temptation Island”.  Marki’s  next step was to get into talent management.  Creative Management Entertainment Group (CMEG) was born. Now 20 years later she has 14 employees working for her, a client roster of whose who in the industry.  She also has an in house studio for workshops and mentoring.  Marki coaches about 100 students a month that go through her media training.  She has worked with some big talent like Jason Kennedy of E! News, 2012 Emmy Award winner, Todd Newton and Debbie Matenopoulos of The View and The Insider, Whitney Cummings, CeeLo Green, Kelly Osbourne and Stacy Keibler to name a few.

“Show business is like the lottery.” says Marki, “It’s not based on who works the hardest, even though hard work pays off, it’s about timing,” Marki explains. “Timing. Luck. Talent. All of these things have to line up for you to walk through the gates of showbiz.” ( clip Enews)

Marki,also puts her talents to work by teaching one of the most prestigious on-camera host seminars in the country. Based on referrals from networks, top Hollywood agents, casting directors and production companies, her monthly “boot camps” have been consistently booked full for over 14 years based on word of mouth. Marki is also a published author. She wrote the very first book on television hosting called “The Inside Secrets Used by Every Successful TV Host” which sold 10,000 copies in the first quarter after its release in 2012.

This past summer when I had the opportunity of meeting this lady I jumped at the chance!  Wouldn’t YOU? 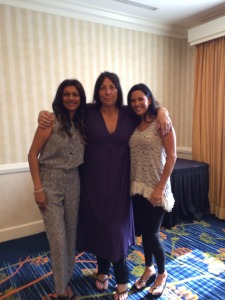 Its no surprise  her boot camp in Fort Lauderdale was sold out.    I was the only Canadian in the bunch.  We wanted to  hear her speak about the industry and teach us some new tricks about the changing industry we call television.  The television industry had changed and changed drastically.  “Gone are the days you have Ken and Barbie as your hosts reading off a teleprompter” says Marki.  Its more off the cuff, reality driven  and  based on “ISMS”.  Yes, thats a real word “ISMS”. (ad-libbing in between a scripted script)

Over the weekend Marki taught us how to BRAND ourselves in an over saturated market.  Find our niche.  It was a little unnerving for me to think out of the box after so many years in the TELEVISION NEWS INDUSTRY.   But thanks to Marki I was able to ad-lib and think out of the box.  A sort of break thru for me a little exhilarating if you want to label the emotion.

Marki has an incredible talent of drawing you out of your comfort zone and revealing skills you never thought you had.  If your an actor,model, reporter, anchor, host or just in need of some public speaking skills I would highly recommend taking one of Mark’s weekend courses.

Marki Costello has been named to “Who’s Who of American Women” by W and Los Angeles Times Magazines and is well known and respected by a diverse cross-section of entertainment and industry executives from coast to coast.  We are trying to get Marki up to Canada to share her wisdom.

I learned a lot that weekend and now I am putting those new skills to work.

Thanks Marki! Your one in a million XOXO

If you would like more information on Marki Costello  visit her